In 2020 all planets go retrograde

In 2020 all planets go retrograde

This year all 7 planets go retrograde. Not all at the same time, but most (6 maximum simultaneously), because Mars and Venus (which go retrograde every second year) are having their retrogradation this year.

May: 4 at the same time
June: almost entire month same 4 planets, But towards the end a small change and 18th-22nd 5 planets, and 23rd-25th even 6 planets! The most in this year.
July: 12 days of 5 retrogrades, then 4.
August 1-4: 4 retrogrades, rest of the month: 5
Septemer: 5 retrogrades, with a changeover, and even 6 retrogrades again for 2 days (10th -12th) – the most dramatic, becasue that’s the start of MARS going retrograde in Aries for almost 2 months. Whatever abnormal things are happening in the world, the Mars can hurt the most.
From mid-November we keep having retrogrades, but only 2, then 1 of the modern “invisible” outer planets. After Mars goes direct, he might need to catch up the degree of his first retrograde station, but the things will start smoothing out after the retrograde Mars peak. Although only after Januray 6th, 2021, the Mars influence will finally cease alltogether as it moves away from the sign of Aries. Because he goes retrograde in Aries, he will stay so long here this year. Take care of whatever things in your life are connected with the Aries sign this year! Especially is Aries is your Ascendant or 10th place in your birth chart or by profection Aries is the lord of the year for you. But also if natally or by profections any cardinal sign (Aries, Capricorn, Libra, Cancer) you have an important placement. 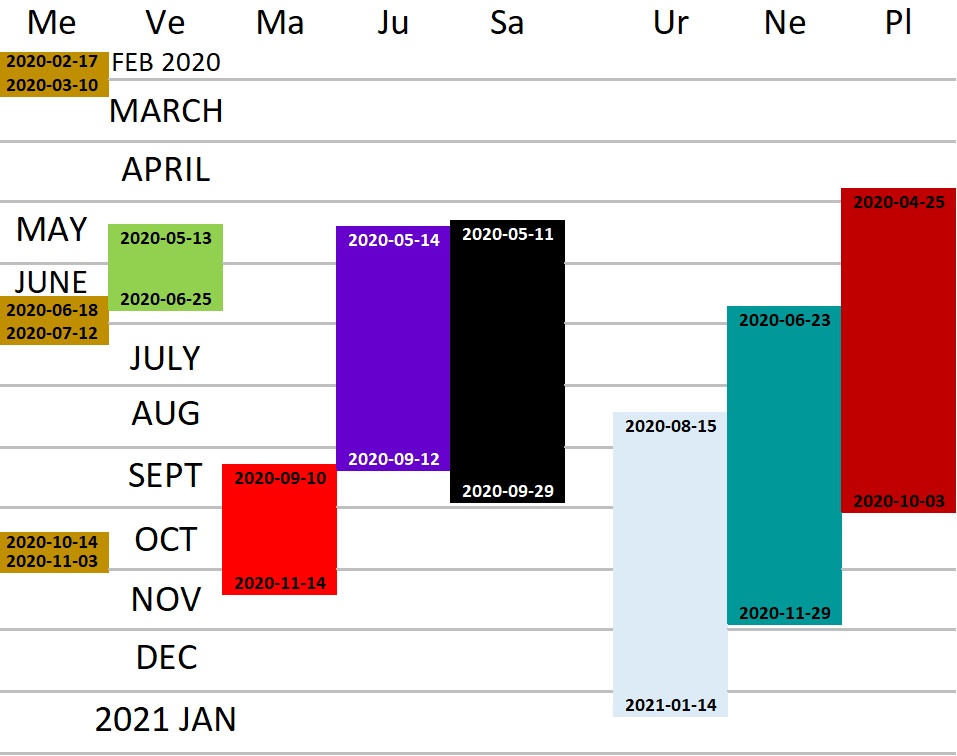