Here’s the English version of the astrological tables I created for Polskie Towarzystwo Astrologiczne (Polish Astrological Society). It is designed to use with traditional methods (Hellenistic and Medieval mostly).

First side contains the essential dignities of planets in a table form.

TRIPLICITIES used here are according to Dorotheus of Sidon (from 1st Century CE).
These are different from Lilly’s triplicity rulers only in that way, that Lilly discards the third rulers and assigns Mars to be the only ruler for the “watery” signs. So it can be still used along Lilly if you’d just remember this slight differences.
In the same way the DECANATES (often shorted as Decans, or also called Faces) are in the Chaldean order, not the so called Varahamihira decans of Indian origins that are widely known in modern astrology, where we assign the rulership over each decan one of the signs of the same element. Here the planets are rulers, not signs, and the order is obviously different.
And lastly: the TERMS (or Bounds) used here are the earlier Egyptian system, which predates the Ptolemaic terms utilized by Lilly. So those astrologers that are faithful with Lilly might want to be careful here. Though, I’m among “the students of Astrology” who find the Egyptian terms seem to work in horary as well, who choose to use it generally, without switching back and forth. But it’s everyone’s personal call, I’m not about to persuade anyone to that approach. 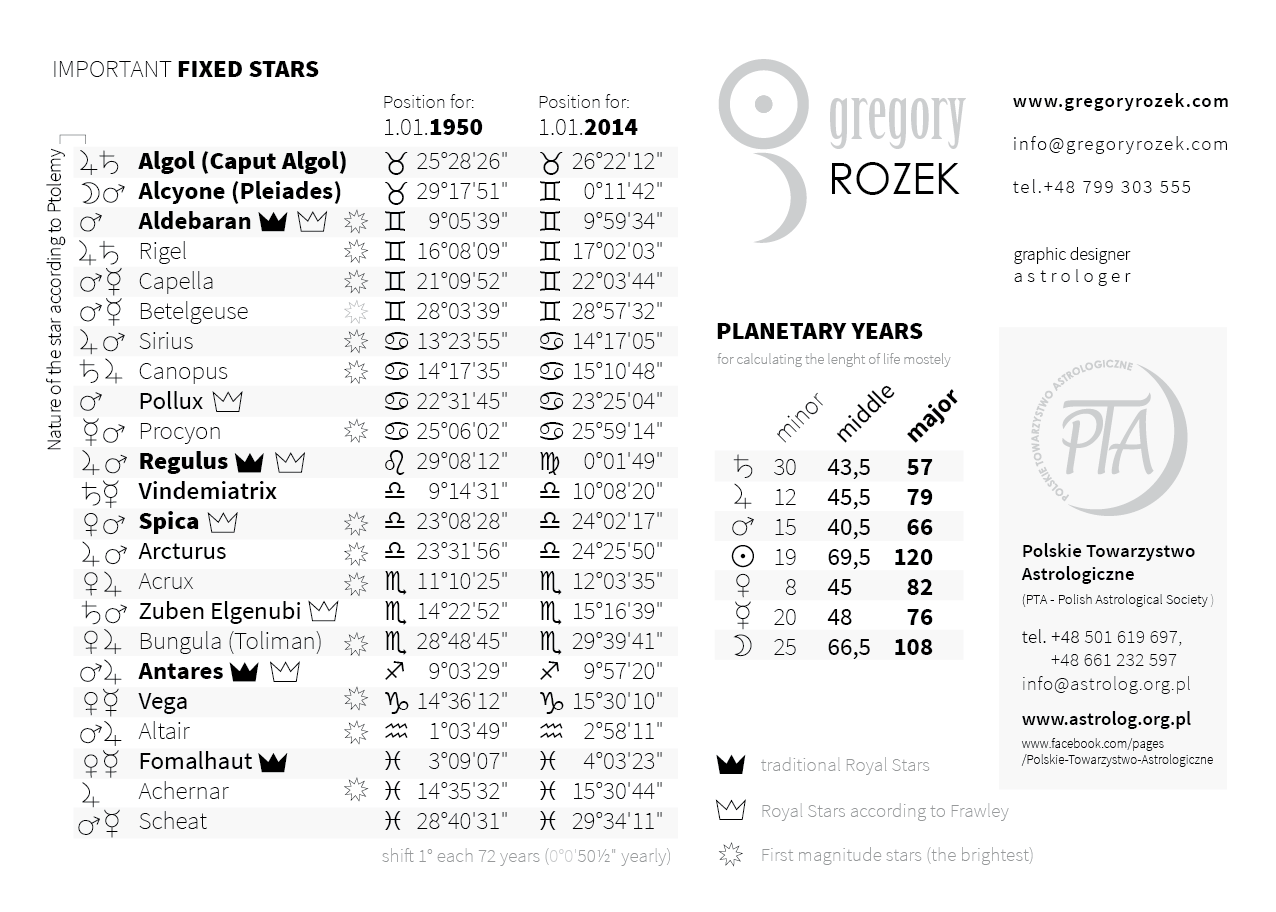 the list of important FIXED STARS.
Choosing the stars wasn’t very easy. I compared many such a “lists of important fixed stars” which differ a bit and the result is my attempt to find which seem to be the most important to most of authors. This is mirrored in how bold the font which the names are written with is. The bolder the name – the more most authors pay attention to the star.Positions for two years are given. 2014 for current horary questions. And 1950 for casting charts of people now living. Below the star list there’s an instruction on how many seconds you should add or subtract for each year forward or back.

And I added some symbols for the stars:

First obvious are the planetary glyphs that indicate the nature of the star according to Ptolemy. For example Betelgeuse, the orange-ish star in Orion has a nature of Mars with some influence of Mercury.

Next are the crown symbols:

Black crown for so called traditional Royal Stars, which were once the four symbolic guardians of directions.

The white crown indicates the six stars that John Frawley calls the Royal Stars – although he’s a contemporary writer, he’s theory of assigning a great power to the stars laying on the ecliptic is actually based on ancient tradition. These two concepts were often confused in the past.

And the symbol of white multi-armed star indicates the stars of the 1st magnitude, which are the brightest ones. Not all of these appear on “important star list” by many authors. Though I decided to place them all here for the sake of medical astrology, where for example Nicholas Culpeper recommends to watch if the Moon is making a conjunction with a first magnitude star when analysing a decumbiture horoscope of illness.
The symbol for first magnitude next to Betelgeuse is grayed out, because it’s a variable star: it varies back and forth in magnitude, once being of 1st magnitude, once not. Yet it would be problematic to exclude it from the list, since it very often IS of first magnitude

On the right side we have a table of PLANETARY YEARS. This is useful mostly for calculating the length of life in the process of choosing the hyleg (hīlāj, apheta or a “giver of life”) and alcocoden (al-kadukhadāh, the “giver of years”). Not very easy nor straightforward method, with several variables, which requires constant adding, subtracting and dividing these planetary years in the table. The maxima years were omitted, since they are used in mundane astrology only where much longer periods are to be considered.

CLICK HERE to download the PDF version of the tables.
They are designed to look nice on a coated paper (ask for such a bit thicker shiny paper in stationary store or a xerox point to use with your own printer or just simply ask at xerox point to print on such. It’s designed to look good in grayscale, so the printing itself would be cheaper, still giving the professional look.