We are soon to have 5 planets retrograde simultaneously.
This happens only around 4% of the time. Having 6 and 7 planets retrograde at the time is much more rare. However what happens around last days of April 2016 is parallel to the last configuration of 7 retrogrades, that happened in 1984 (extremely rare, I repeat).

the Number of Retrogrades in the Chart

Read my article on

to get both the statistical data, my general research interpretative findings as well as the specific example of 1984 charts with the most possible number of planets going retrograde. 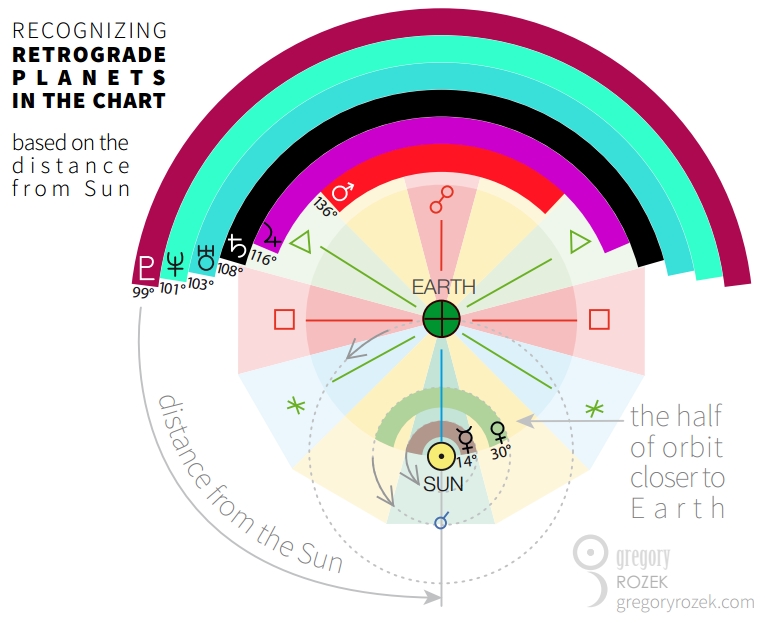 the Number of Retrogrades in the Chart

Get ready for a big comeback of themes!

Themes that are difficult, because the 7 retrograding planets from 1984 made lots of things very complicated and hard to change. Think of fate-like things that do not react no matter how you approach them, you think its either illogical, fated or you must be psychotic or being manipulated. And mind that, if all the statistically possible planets go retrograde – that is against the grain – that would be majority of things going insanely opposite of what a sane mind would expect.

Jupiter and Saturn are already retrograde.
On April 17th 2016 Mars will turn retrograde (it is already in station, about to change direction to reverse of the usual motion).

A day later, on April 18 – Pluto will turn retrograde too.

And finally on April 29th – Mercury will turn retrograde too.
A day after that Venus will enter into same sign Mercury is in. Therefore making the whole configuration of planet extremely parallel that of few days between the end of April and beginning of May in 1984 – when people with 7 retrogrades were born.

Retrograde planets generally either take away what was given earlier (what majority of people hate them for), or correct what was wrong (what most of smart ones praise them fore and take use of).
So they change a lot.

When retrograde by transit they do that quite vividly if they coincide with the right astrological time-lord periods of one’s birth chart.
You can expect things and people that disappeared long time ago to resurface. But also things that you weren’t able to do for many years, no matter how hard you try, to just change like an old broken clock that has been set on again.

When retrogradations repeat almost exactly the same configurations after 32 years – you can expect to make a full circle. If you were born that exactly 32 years ago – whoo, that’s like resenting your life experience. And on April/May 1984 were born people with many retrograde planets – who knew a lot as kids but were forced to be “normal”. They might be finally able to reunite what they confined to become with what they truly were/are. Expect them to make some kind of a deep full circle.

Currently Mars and Saturn – two malefic planets are together and retrograde – that is definitely some tough change.
Jupiter is retrograde and weak, but is in 4th sign from Mars and Saturn or in other words is dominating over the malefics.
This promises that the bad stuff will be hard to work out, as Jupiter is not at home with much resources, but with determination that can finally cut the rotten ends and end these overdue issues with an iron fist. With a lot of chore of course, but clearly allowing to finish what couldn’t be dealt with for the long time (often times, what, 32 years of misery? That’s huge!).

The most clear popping thing to being predicted from that – is hopefully ability to put the final end to  some heavy abuse, violence and freedom-banishing hate many people experience their whole life (seemingly more so with lot of natal retrogrades, but definitely not only).

We had 5 planets retrograde simultaneously last year (2015) in summer. But this very easy when 3 outer planets (Uranus, Neptune and Pluto) are clustered in adjacent couple of signs for many years – as they get to be retrograde every year together – so it takes only two other planets to happen to retrograde at the same time.
However the last times when the exact SAME PLANETS – ☿ ♀ ♂ ♃ ♄ ♅ ♆ ♇ –
were retrograde as on the last days of April 2016 on following months (usually for couple of days):

If we are taking into account to match only the classical planets – then ☿ ♀ ♂ ♃ ♄
were retrograde also in:

Mercury retrograde in one sign together with direct Venus.

Mars Retrograde in one sign together with Saturn Retrograde.

These two groups being switched one sign further on (Mercury-Venus from Aries in 1984 to Taurus in 2016, Mars-Saturn from Scorpio then to Sagittarius now), which makes them keep the same configuration by sign (inconjunction). In 1984 Mars was extremely powerful in configuration (in own sign of Scorpio and dispositing the sign of Aries where the pair Mercury-Venus were), now it is Venus who will be in her sign.

Jupiter is Retrograde alone in earth-trigon sign. In 1984 it was in extremely terrible fall in Capricorn. Now it is in less terrible, but still rather bad placement of detriment in Virgo. In both charts this Jupiter Retrograde aspects both of the other two groups (Mercury-Venus and Mars-Saturn)

Also the outer planets share some resemblance to 1984 sky.
Pluto is Retrograde and 2 signs apart from Neptune, that is in both charts they are in sextile and now this configuration is switched also 2 signs further on. So Pluto Retrograde is now where Neptune was in 1984. However Neptune was Retrograde in 1984 configuration, now it is not.
Same with Uranus – it was Retrograde in 1984, now is direct just like Neptune. But this is obvious – as this is the same time of the year, so the Sun is in the same place in the zodiac. They are several signs closer to the Sun now, comparing to 1984, so they cannot be retrograde. However Uranus and Neptune in both charts are in adjacent signs to each other. And they are both either Retrograde or Direct – if we want to count that.

Again, get ready for some changes. If you buckle up, you can finally create the change you were unable to achieve for so many years.